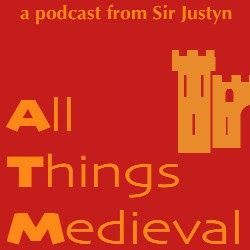 Welcome my Lords and Ladies.

It has been a long time. Thanks for hanging in there.

Winner of the Prize! Wintermaide.

Get in touch with me here at ATM on the forums at www.sirjustyn.com or by email at podcast@sirjustyn.com

v English War Crimes at Agincourt. French historians last year were using the anniversary of the Battle of Agincourt to accuse England's soldiers of acting like "war criminals''.

v Duelling in Qld "Queenslanders can now challenge one another to duels but face jail for leaving their children unsupervised."

v Jon “The Vicar” Stallards book Butler of Droitwitch is a massive 400+ page tome. You can find it over at Lulu.com

v Arizona Renaissance Festival 2009 February 7 - March 29 If you are a fan of the Medieval Babes you can see them perform live at this event. With over 265 000 people attending this event it is one of the biggest fayres in the world.

v Bob Charron is coming to Australia http://www.fsmd.com.au/ and it might not be too late to book yourself a spot in one of his swordsmanship workshops. Hosted by the Fiore School of Medieval Defence the seminars are to be held in Melbourne, Perth and Brisbane. Victoria – 14th and 15th March 2009
Western Australia – 21st and 22nd March 2009
Queensland – 28th and 29th March 2009

v The Jorvik viking festival is on Feb 18-22nd. Vikings from around the world meet to fight, trade and commemorate their shared heritage. http://www.jorvik-viking-centre.co.uk/ Coppergate, York.

v The film FAINTHEART (http://www.myspace.com/faintheartthemovie) is being released on January 27th for free in 150 cinemas around the UK. The DVD is available from Feb. 2nd.

Listener Feedback and Q&A. ir Justyn is flying by the seat of his pants in this fun Q&A session.

http://www.bikiniduck.com/catalog/product_info.php?products_id=70 for a Valentines Day Teddy Bear in maille

Feedback and In Closing

Baird kindly let me know about a second William the Conqueror movie being made. http://www.darkhorizons.com/news08/081028a.php Thank you Baird.

Some other Lords and Ladies I’d like to say hi to and say thanks for all of your kindness are Wintermaide, The Vicar, Sara, Maid Marian, Medieval Mitch, Strange Attractor, Willies Wenches, Lady Maladicta and the Pirate Princess and many others I am sure to have forgotten!

Huzzah, the famine is over - so glad to hear the show is back.